Here at Equipoise Software not only have we been developing our Pre-Stack Inversion module but we have done a number of updates and enhancements for VelPAK available in Kingdom 2020.

Here is Part 2 of the list of fabulous updates. Join us again for our August post for Part 3!

For depth uncertainty and other reasons, it is sometimes beneficial to see the behaviour of the regression or polynomial fitting beyond the bounds of the live data.  The new “Curve > Display > Extrapolate” fly-out option allows this when set to “Yes”.  The fitted function line will plot to the bounds of the display axes.  Zoom out to extend the visible range (or manually set the Range using the new “Display > Range” tab).

In projects with many 2d lines, generation of velocity volumes to SEGY format is now much easier.  Set the “Survey” name to “ALL” and files named after the survey are generated.  Volumes may be generated from snapped and depth conversion Profiles as in previous release, or now can be generated from the grids in the model (set Velocity > Volume > 2d > Type as “SEGY_From_Model”).

A new option for creation of pseudo-wells (also known as stack wells) exists in the Velocity > Amalg fly-out.  Use the new purple + icon to create the wells at the trace locations, then press the Apply button to poulate those wells with the velocities from the seismic velocities loaded.

By setting the “Radius” value to zero, you can create wells from the single seismic velocity trace at that location. 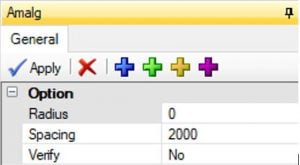 Merging new well data into an existing model is now considerably quicker as it is no longer to reselect grids or the layer definition formation tops.

On the well log selection page, there are now button “Selected On” and “Selected Off” to allow you to toggle multiple items selected in the wells list on or off quickly, making for faster bulk selection or deselection of well logs. 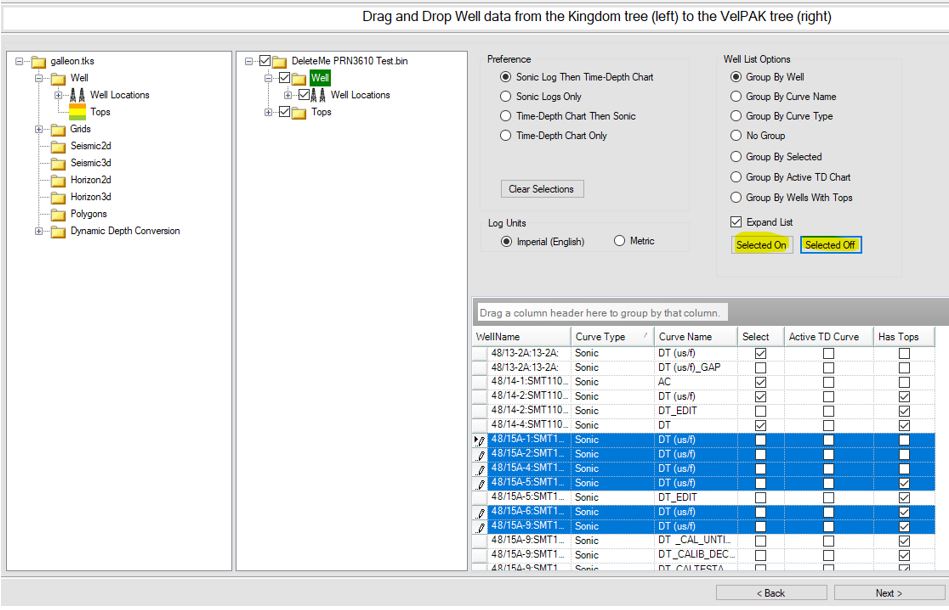