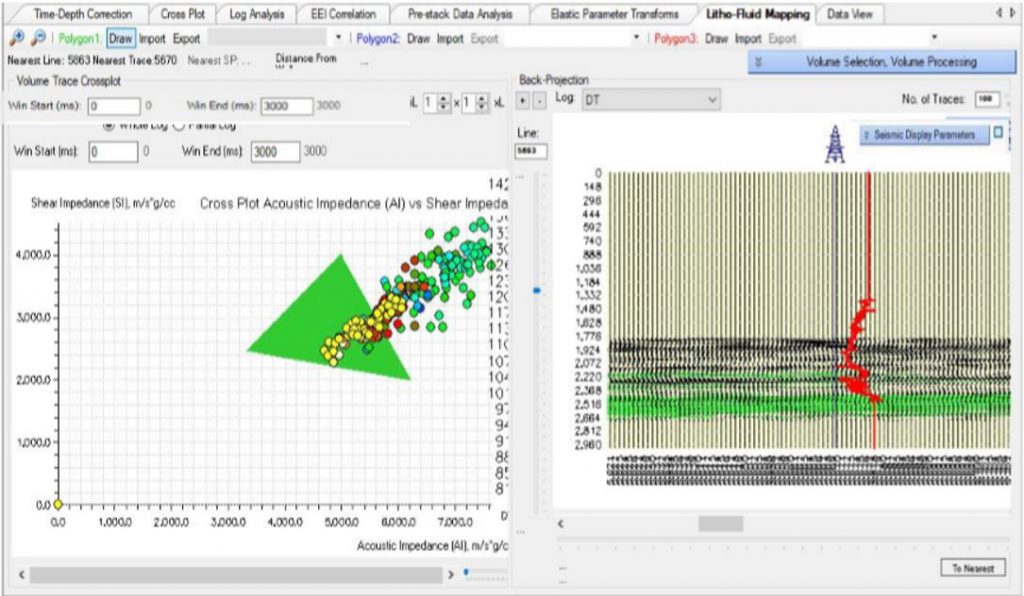 This leverages the Simulated Annealing Inversion technology for a multi-parameter approach to uniquely identifying rock & reservoir properties. The techniques are suitable for both conventional and unconventional targets.

This will generate acoustic impedance, shear impedance & density volumes which can be correlated with logs and transformed into petrophysical properties for mapping and analysis. Typical properties are Poisson’s Ratio, Lambda-Rho, Mu-Rho, Young’s Modulus and Brittleness/Ductility.

Inputs required are typically angle stacks, compressional and shear velocity logs from a well (or wells) tied with a high-quality time-depth chart, and a velocity or impedance volume to constrain the inversion.

This is a fast, lightweight inversion to an approximation of relative acoustic impedance. The spectrum of the inverted data closely matches that of the well impedance log within the seismic bandwidth, ideal for enhancing the character of the seismic trace for interpretation purposes, enhancing features such as minor faulting, fracture zones and discontinuities due to channels and possibly the presence of hydrocarbons.

This is a model driven inversion to high resolution absolute and relative acoustic impedance.  The Simulated Annealing method is a robust and proven global optimisation algorithm to derive the layered impedance models via a stochastic search of the model space. The SA inversion enables the confusing presence of the seismic wavelet to be removed as well as achieving the transformation from boundary to layer properties. The SA inversion job parameters are determined by inverting one seismic trace near a well and by comparing the results with known log impedance. The volume inversion may be carried out using the optimised job parameters. A background low frequency model may be generated within the SA package or provided from an external source.