Staff at Equipoise Towers are working hard to bring you the latest Velit/VelPAK 2.6 update later this year. So, what’s new and what’s improved? Here is a sneaky peak at some of the new and improved features!

Gridding using Natural Neighbours 3 < 2500 points hangs – Fixed
A bug that crept into the “Natural Neighbors 3” gridding routine caused the routine to hang indefinitely. The Natural Neighbor interpolation algorithm uses a weighted average of the neighboring observations, where the weights are proportional to the “borrowed area” and is used increasingly in the stochastic modelling for depth uncertainty.

Abort button did not work in some modules – Fixed
Doing a direct depth conversion in the wizard for the velocity modelling routines found that the abort button would not work. A third party cancel function has been implemented.

Petrel Link
Petrel Depth Conversion and velocity modelling in Petrel is aided by using the link to Velit. The link has been redeveloped to produce a dedicated area for Velit projects.

Curve Module
Hidden/Inactive points on the graph are now excluded when the AoI is recalculated.

3D Tool
3D Module is a useful QC for checking the grids have come across from Kingdom or Petrel correctly before depth conversion and velocity modelling. New enhancements make it easier to use with an instant display of the time grids being on show. 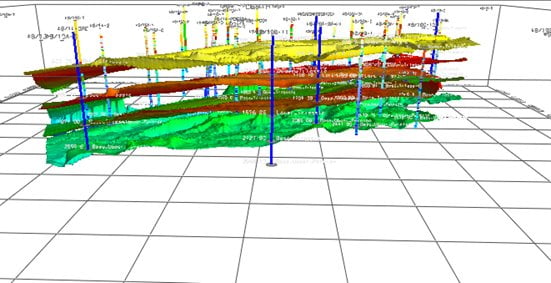