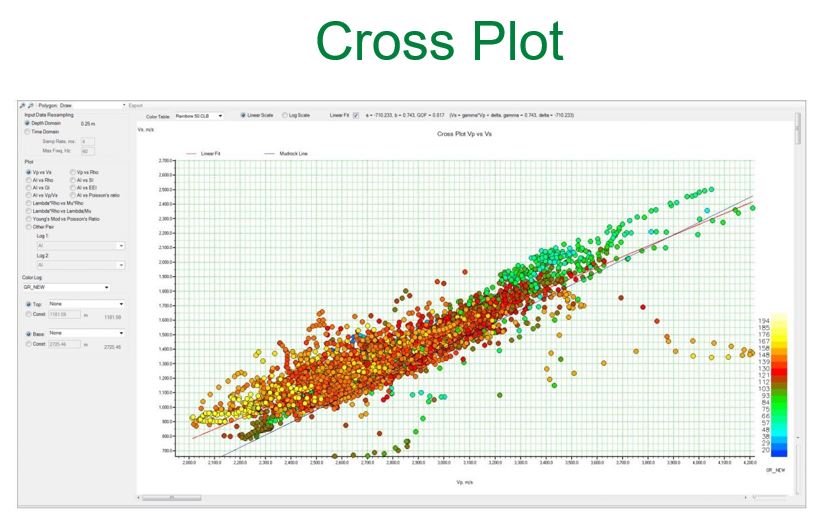 Continuing our in-depth look at our Seismic Inversion software.

Pairs of Elastic Parameters can be selected for display or select your own pairing to find a relationship between elastic logs and any petrophysical log. Each point represents one sample from the logs. 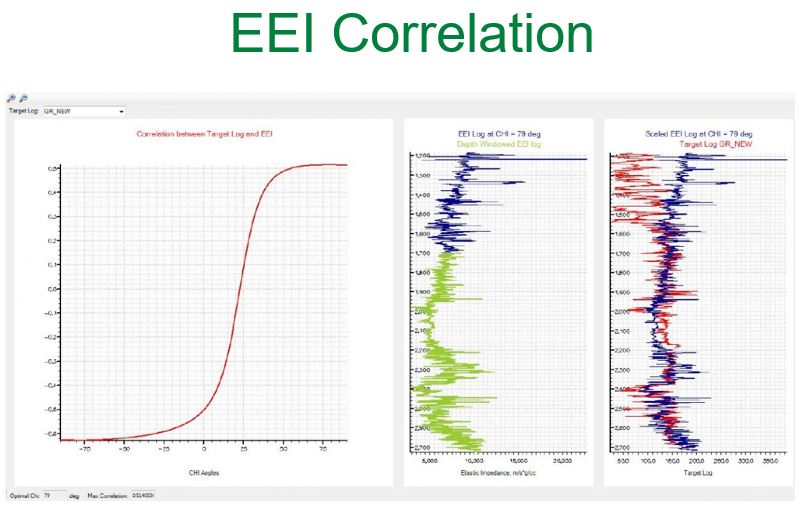 Extended elastic impedance is a clever way of combining, in the intercept and gradient domain, the values of compressional velocity, shear velocity and density, with a rotational angle called chi. When the rotational angle chi is zero, the extended elastic impedance value is the normal incident acoustic impedance.  This gives us the useful situation whereby we can relate elastic parameters to each other through the value of chi. The EEI trace with the highest correlation is calculated and the Chi which produces the best match between EI and the target log is shown as the optimal Chi. This becomes the Chi angle used in the Log Analysis tab and Pre-stack Data Analysis tab. The Win Start/ Win End can be used to focus on a small area of the log to generate the Chi value. For example, if shallow parts of the log are included in the calculation the max correlation may be very small. By focusing more on the target area of the logs by selecting the Win Start and Win End the correlation can be improved. The target log can be an elastic log such as Vp/Vs, Poisson’s ratio with correlation coefficients up to 88%, Young’s modulus and lambda-rho. It can also be a petrophysical log such as Gamma rays, porosity, water saturation, shale volume and TOC. The left graph shows the optimum correlation calculation between the target log and EEI, the optimal Chi is generated where the Coefficient is maximum. It shows the relationship between EEI and the target log for all angles -90 to 90 degrees along the x-axis, versus the correlation coefficient to any chosen target log on the y-axis.  The maximum correlation defines the chi angle relating EEI to the target log and the Chi angle calculated for use in other tabs.

Once the prospect has been established using the previous tools– whether that be differentiating, for example, gas and fluid bearing sands in a conventional play, or highly ductile or brittle zones in an unconventional play, we then proceed to prepare data for the inversion. This module takes Angle Stacks and performs AVO analysis to transform them into P, S and Density reflectivities. Using available seismic data, two types of data sets can be generated – the EEI option generates EEI reflectivity data from given a CHI value. This volume can be inverted to elastic impedance. The CPI (Cascaded pre-stack inversion) option generates P and S and density reflectivity data from angle stacks or from A and B stacks (also called intercept and gradient stacks). If  A and B stacks are loaded as seismic volumes into the Kingdom project, these can be used. The Vp/Vs ratio must be defined – this can be a constant (computed from the logs), or use the logs themselves, or define the Vp to Vs relationship via the mudrock formula, the values being defined from the cross-plot module. There is also the option to use a Vp and a Vs volume. 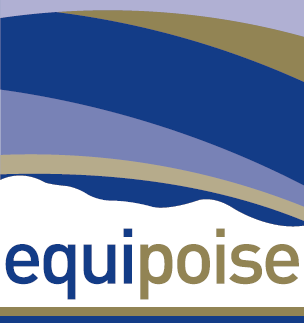