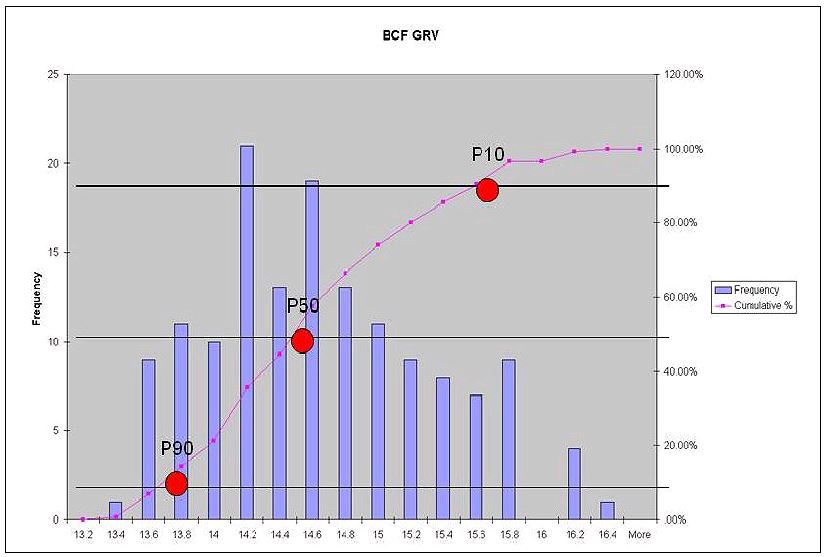 A stochastic model is a tool for estimating probability distributions of potential outcomes by allowing for random variation in one or more inputs over time. The random variation is usually based on fluctuations observed in historical data for a selected period using standard timeseries techniques.

Depth conversion is generally responsible for the bulk of the depth in the estimation of field reserves. The standard Velit depth conversion routines [and associated workflows] produce accurate velocity models very quickly, but it is important to derive an estimate of the uncertainty in the depth horizons of interest.

The Analyze tool enables the user to develop a reasonable estimate of depth uncertainty based on a large number of depth models derived from one or more depth conversion scheme and allows the user to identify the key parameters controlling the range of Gross Rock Volume.

An ‘absolute’ answer to the depth conversion problem is impossible; the looped depth conversion processes available in the workflow system will generate multiple depth conversion models. The Analyze Module then allows filtering and analysis of the results and gives confidence as to the likely range of uncertainty in the model, and the deterministic parameters which will yield credible P50 (most likely) and end-point (P10, P90) solutions.

P10, P50, P90
The Analyze Module can estimate Proved, Probable and Possible (P90, P50, P10) Gross Rock Volumes. Proved (P90) – The lowest figure, 90% of models are larger.
Proved and Probable (P50) – The most likely figure (median), the figure that is expected to be closest to the true reserves.
Proved and Probable and Possible (P10) – The highest figure, 90% of models are smaller than this figure.